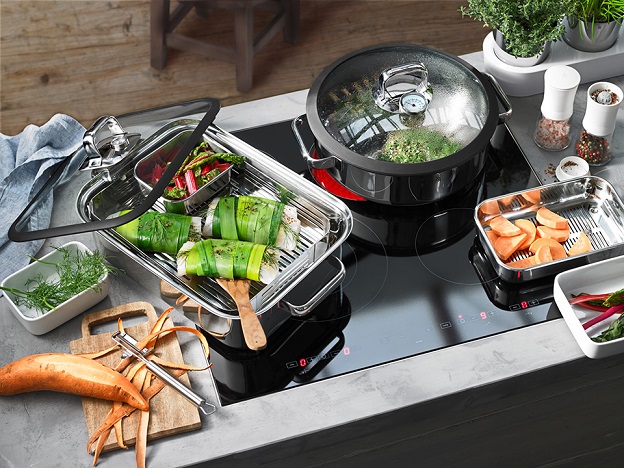 What is steam cooking?
Steamed steam is a cooking technique; in particular it is a method for "convection", that is, which transmits heat through a secondary means placed between the heat generator and the food to be treated.
Pots, casseroles and pots with a special steaming basket, steamer, steam oven, pressure cooker.
It is possible to steam even under vacuum, thanks to the use of the appropriate storage system. It is a poorly used method because it is less effective than vacuum cooking due to drowning or tampering.
What are the benefits of steaming?
Steam cooking is unanimously considered to be the healthiest cooking method, ideal - above all - to preserve the maximum vitamin and mineral content of foods.
Various advantages are attributed to the steaming of meat, fish and vegetables, compared to the use of other techniques:
Preserves more the original organoleptic characteristics of the food, not only in terms of more lively flavor, but also in appearance (color) and consistency. This is due to the treatment temperature (relatively low) and the slowness with which it reaches the heart of the food. Furthermore, it does not cause dilution of the aromatic components that remain predominantly inside the tissues.
Also thanks to the slowness and uniformity of heat transmission, does not lead to the formation of substances difficult to digest, if not toxic or carcinogenic, resulting from cooking at high temperatures (as happens for grilling or frying food). It is however not very suitable for denaturing the collagen of certain meats (used for stra-cooking or for broths) and the connective ones of cephalopod molluscs (octopus, cuttlefish, etc.). It does not require the addition of various oils and seasonings, which may added raw when cooked. In addition, the fat component that "melts" due to the heat, does not remain in direct contact with the food but falls into boiling water (which does not happen, in addition to traditional conduction techniques, even in vacuum cooking and in the vasocottura). In this way, steamed foods are easier to digest and less calories; steam is therefore a cooking method particularly indicated in the case of slimming diets
As anticipated, due to the contained temperatures and the lack of direct contact with the cooking water, the steam allows to preserve a good part of the thermolabile vitamins contained in the food (especially in vegetables) and of the mineral salts
It is a cooking method that is quite practical but not always fast. We could define that the shorter the steam cooking, the greater the quantity of vitamins preserved; sometimes however, to the detriment of digestibility.
It does not require particularly expensive pots and utensils, which among other things are simple to clean at the end of cooking with savings on the use of detergents.

WMF Vitalis is suitable for all hobs, including induction. Using the perforated insert with practical lifting support, it is possible to steam and flavor. Also usable in the oven, it is suitable for the preparation of sauces, fish, meat and risotto. The removable thermometer allows you to check the cooking temperature. Enhances the flavors of vegetables by cooking them with WMF Vitalis, preserves the authentic flavor of the ingredients and cook them gently. During cooking, the sauces released from meat, fish and vegetables are deposited with which you can prepare delicious reductions. WMF Vitalis is multifunctional, facilitates the control of the cooking temperature and allows you to complete it in the oven if required by the prepared dish. WMF Vitalis used without insert is suitable for the preparation of meat, fish, sauces and risotto. 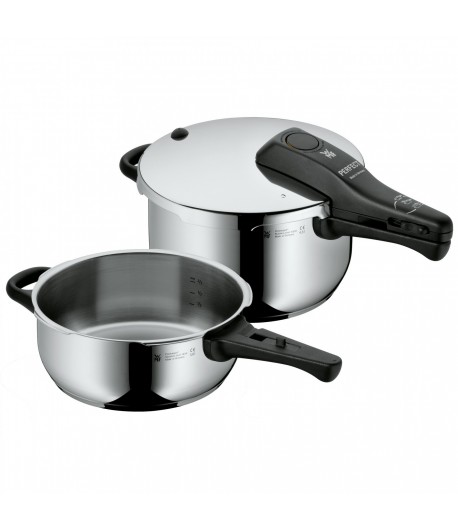 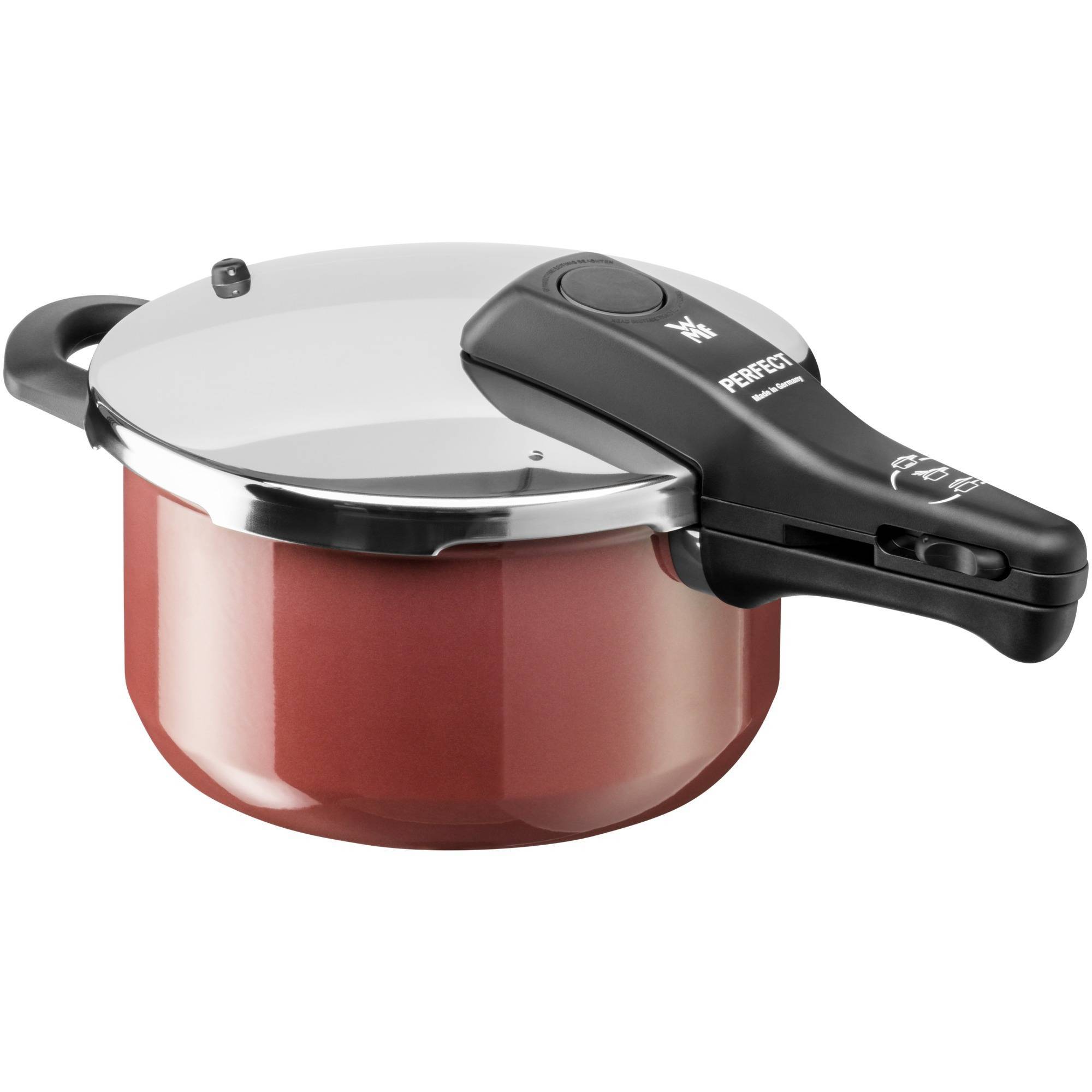 Indestructible material guaranteed for 30 years, keeps its properties intact over time, is hygienic and does not alter the taste of food
Bayonet lock with all-in-one slider that controls opening / closing, cooking levels and steam release
Two cooking levels
Removable and washable airtight lid
Made in Germany
Product description

The Fusiontec pressure cooker combines the innovative WMF Patented Fusiontec material with the proven technology of WMF's Perfect Premium pressure cookers. The pressure and high temperatures, combined with the uniform heat distribution thanks to the Fusiontec material, allow you to significantly reduce conventional cooking times by up to 70%, while at the same time saving around 50% of energy. Vitamins, nutrients and minerals are largely preserved through gentle cooking and the dishes are nutritious and tasty. Suitable for preparing any type of food: vegetables, meat and fish, cereals and legumes, soups and stews, desserts and baby food.

Fusiontec is an innovative patented WMF material: the perfect fusion between a steel core and multiple layers of natural minerals, encompassing all the main benefits of steel and cast iron. Like steel, it is dishwasher safe, non-porous and therefore highly hygienic, like cast iron it is able to perfectly distribute heat over the entire surface. Furthermore, Fusiontec is suitable for all hobs (including induction), is scratch resistant and versatile. The Fusiontec Mineral range is also equipped with a high quality glass lid, for visible cooking. The range includes pots, pans and casseroles. WMF warrants this product in its entirety for 30 years. 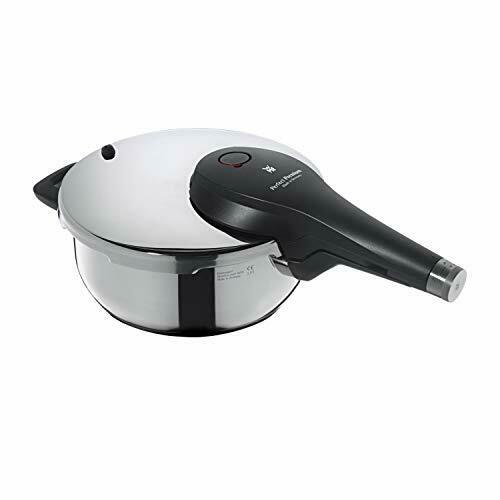 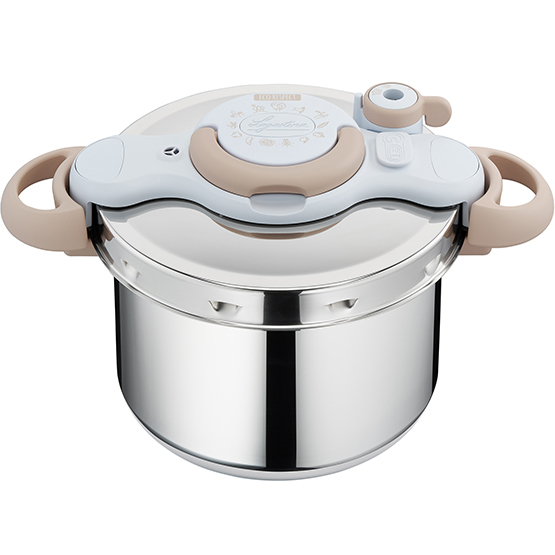 ClipsoMinut 'Eco Respect is the first Lagostina pressure cooker designed to be eco-sustainable. The 18/10 stainless steel body is manufactured using 80% recycled steel, and the box is also made from recycled cardboard. The product is therefore fully recyclable in the future as well, to minimize the environmental impact! The three-layer encapsulated steel-aluminum-steel bottom, also suitable for induction, guarantees perfect heat diffusion. The lid is practical to use, thanks to the easy opening system with one hand: just lift or lower the handle to open and close it in complete safety and without effort. In addition, it is equipped with an operating valve with vertical and controlled steam discharge. Finally, the pot is equipped with a practical steam cooking basket, with which to prepare all your favorite dishes: discover many recipes with your new pressure cooker by downloading the Lagostina app, available for Android and Ios. 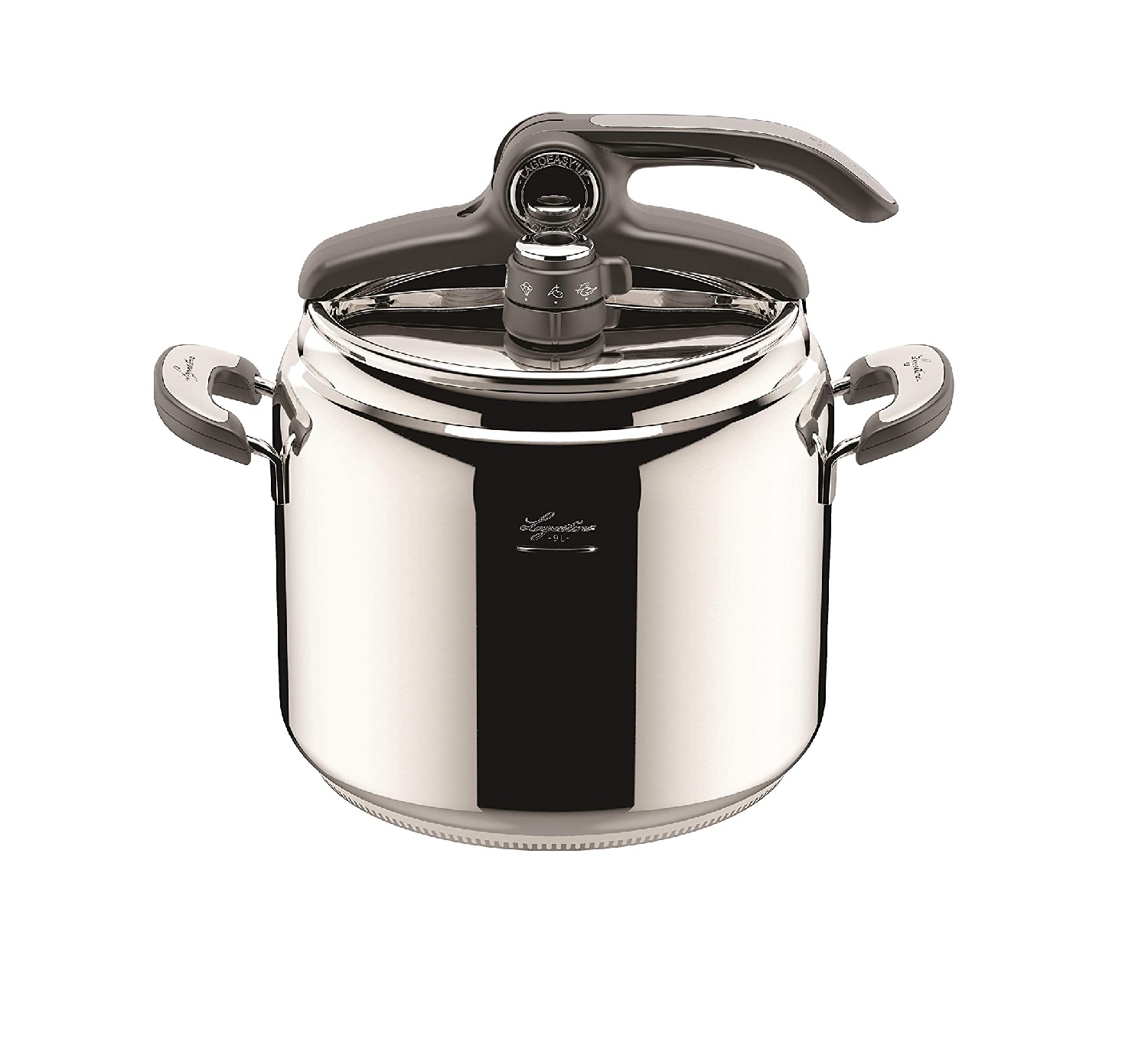 The NOVIA® VITAMIN LAGOEASY'UP pressure cooker represents today an unprecedented innovation thanks to the exclusive LagoEasy'Up® Technology, the new patented opening system, easy to open with one hand and in one movement. The pressure cooker is a versatile tool because it allows steaming, dipping and browning; it is healthy, because cooking in a pressure cooker preserves up to 35% more vitamins and minerals; it is fast, because it reduces cooking times by up to 50%. It is also equipped with 6 safety systems and the two-pressure Vitamin valve: position 1 for delicate foods such as vegetables, position 2 for meat and fish. The 3-layer LAGOFUSION® base is suitable for all hobs, including induction, for perfect heat diffusion. 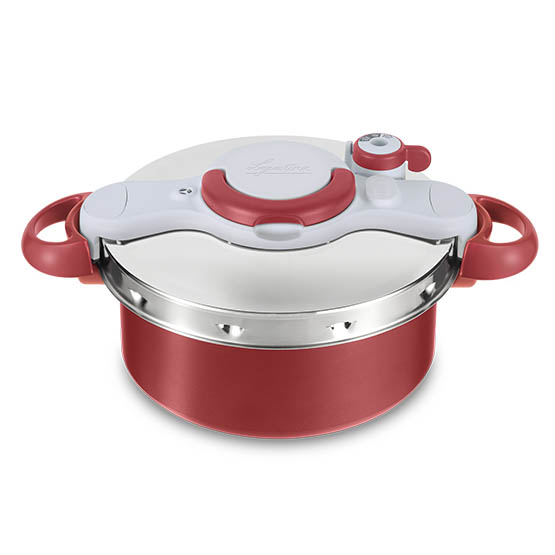 
Clipso Minut 'Duo is the innovative 2-in-1 pressure cooker Lagostina. Thanks to the latest generation valve, it is ideal for long, long-lasting cooking, in casserole mode, and for quick and healthy recipes, with pressure vessel mode. The non-stick interior is easy to clean and ensures tasty recipes, even with little topping; If you need more ideas at the stove you can always consult the practical recipe included. ClipsoMinut 'Duo is ideal for anyone who wants to experiment in the kitchen, but also for the less experienced ones; in fact, it is easy to use, thanks to the one-hand opening and closing system. Cooking on slow or pressurized cooking, to you the choice!
Suitable for induction.