SHOP IN By changing the country, delivery and prices maybe can change.
Europe
Extra CEE 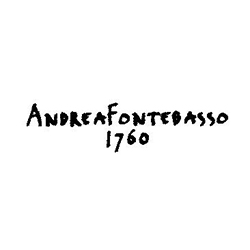 La Fontebasso was a ceramics factory in Treviso, founded by the family in the mid-eighteenth century.

The founder of the family was Gerolamo, whose personal data are ignored. Bocaler (manufacturer of mugs) with a small workshop at the Ursuline convent, is attested in 1752, when he signed a petition with other artisans in which he complained about the trade in the city of Latterini of Bassano origin.

The activity underwent an important strengthening with Giovanni, probably son of the previous one. He was responsible for the opening of a new factory in the area of ​​San Francesco, which produced "English-style" earthenware and experimented in the field of porcelain. This period dates back to the earliest surviving artefacts, a porcelain cup with lid and plate, decorated with ovals with landscapes inside and marked "F. F. Treviso 1799"; it is kept at the British Museum in London.

At death management passed to his sons Andrea and Giuseppe, who have been the owners of the company since 1827. This date is in fact reported on a pottery plate exposed at the Civic Museums of Treviso, decorated by Gaetano Negrisolo with a representation of the San Luca; this painter collaborated with Fontebasso until the 1830s, when he moved to Milan. During the management of the two brothers, the factory specialized in the production of small artifacts such as boxes and cups with saucers, characterized by simple neoclassical lines and floral ornaments, pastoral scenes, military figures, landscapes.

By 1840 two celebratory busts were made of the Austrian emperors Francesco I and Ferdinando I. Under the Habsburg rule, Fontebasso received numerous awards: from 1814 to 1866 it had the title "Imperial Regia Privilegiata Fabbrica" ​​and in 1825 it was visited by some members of the family imperial; the brothers also obtained two silver medals, in 1825 for earthenware and in 1831 for porcelain.

When Giuseppe died in 1852, Andrea opened the business to other members. Probably, he too soon expired, leaving his quota to his son Fausto. During this period, Fontebasso embraced serial production and entered the foreign market by manufacturing counterfeits of Wedgwood ceramics. On the other hand, the production of pottery continued, and some specimens gained appreciation for the 1861 Florence exhibition.

In 1862 Fausto died and the company passed to his partner Carlo De Sordi. La Fontebasso retained the original trademark up to the present day; since the 1980s it is part of the Tognana group.

Elegant for special nights or fresh looking for informal events. The Andrea Fontebasso style enriches your table with grace and freshness. View our catalogue and discover the manufacturing tradition that has fallen in love with the future.

Back to the top